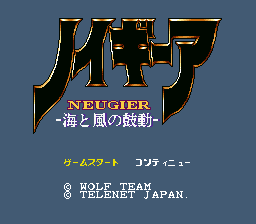 Neugier Umi to Kaze no Kodou is a Hack'n Slash game. It was developed by Wolf Team and published by Telenet Japan. It was released in Japan in the year 1993. The gameplay is similar to Legend of Zelda series and Ys series slash, jump, dodge and the ability to use your chain for pushing, pulling and breaking some walls with objects like rocks, chest or enemies and you can use the chain to grab the wall.