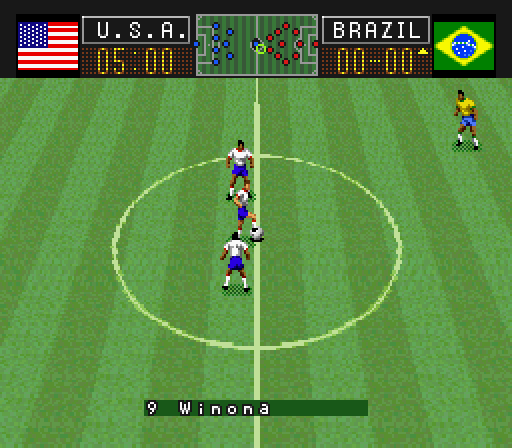 The gameplay progresses in a side view, similar to an arcade soccer game. There are different formations to choose from, and all the players (except the goalkeeper) can be positioned anywhere in the field. Up to four players (SNES Multitap required) can compete in a series of games that include Exhibition, Full J.League Season, and All-Star Game modes. There are also Penalty Kick, Indoor Soccer (also known as Saloon football), and Training modes. The game boasts a realistic style including bicycle kicks, side tackles, diving saves along with several other moves. Players can strategize to be either neutral, on the offensive, or on the defensive. A complete board game map with all the players as dots appear on the top of the screen. All the players' names are in Japanese. Own goals are treated differently than normal goals and are given their own cutscene.