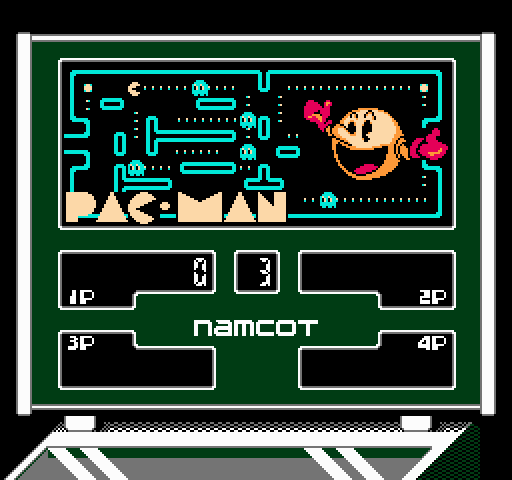 There are several gameplay options in the game. Some are; "regular pinball" for up to four players which resembles a game of Pac-Man (rock and roll in the North American version),[3] "nineball" where balls are knocked into a Bingo pattern, "battle pinball" (which operates more like Pong instead of pinball), and "sports pinball" where the pinball game becomes more similar to a soccer or hockey field.[1] There are three different variations to the "battle pinball" mode; "thunder," "bomber," and the basic "attack" mode. All three of these options uses specialized flippers and a specialized pinball. For example, the "bomber" mode has a pinball that explodes after a certain time limit has been reached and the player's two target switches have been turned into bombs. A switch on the right-hand side of the board activates the special effects in the "attack" mode. Special guest characters in the Japanese version of the game include the Pac-Man character from the video game of the same name, Valkyrie from the video game Valkyrie no Bōken: Toki no Kagi Densetsu, Wonder Momo and Kai from the Babylonian Castle Saga series.