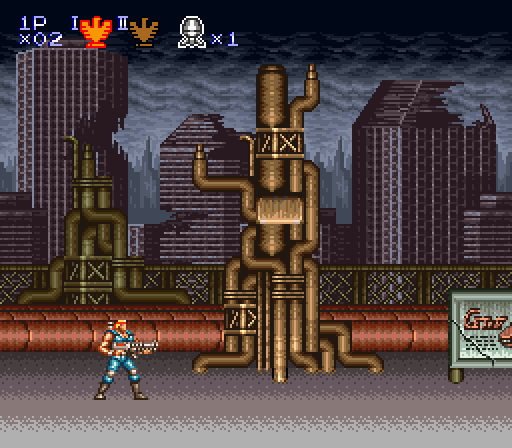 Taking advantage of the then new technology provided by the Super NES, The Alien Wars graphics improved upon those of earlier games. The level design is more complex, and provides more opportunity for interaction than was possible in previous Contra installments. For instance, players can grab on to poles and navigate them in a monkey bar fashion, climb walls and ladders, destroy buildings and scenery, and commandeer tanks. New styles of levels in The Alien Wars involve motorcycle chases, riding on missiles, and two Mode 7 enabled overhead levels similar to those in Super Contra. The weapons system is revamped, and players can carry two weapons instead of one, only losing the one they are currently using if they die. They can also fire these two weapons simultaneously in a spin-jump circular fire pattern that hit enemies on all sides: however, being hit while doing so results in the player losing both of their weapons. Finally, the player now starts off with the assault rifles instead of the semi-automatic rifle, much like Operation C, eliminating the need to tap the fire button rapidly.