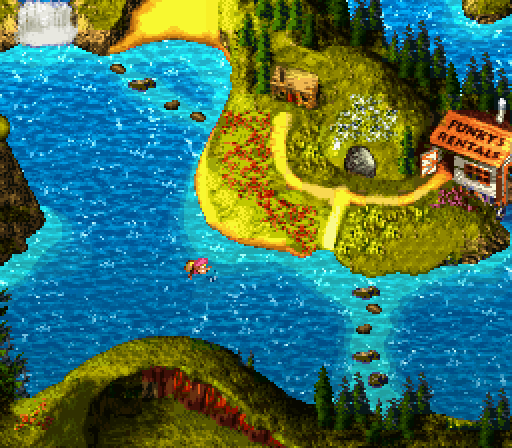 Donkey Kong Country 3: Dixie Kong's Double Trouble! is the final installment in the original Donkey Kong Country trilogy. Dixie Kong and her toddler cousin Kiddy Kong have to discover the location of missing vacationers (they went on a fishing trip) Donkey Kong and Diddy Kong. Meanwhile, the Kremling Krew returns under the leadership of the mysterious robot KAOS, who K. Rool (called Baron K. Roolenstein in this game) is secretly controlling. Unlike the previous installment, which featured a pirate high-seas adventure theme, this game has more of a mix between a mechanical theme and a generic theme similar to the first game, but unlike Donkey Kong Country 's often tropical sceneries, this game features locations much more similar to northern Europe and similar climates, including the presence of bears. The events of the game were located in the Northern Kremisphere, a hitherto unseen part of the DK Isles.