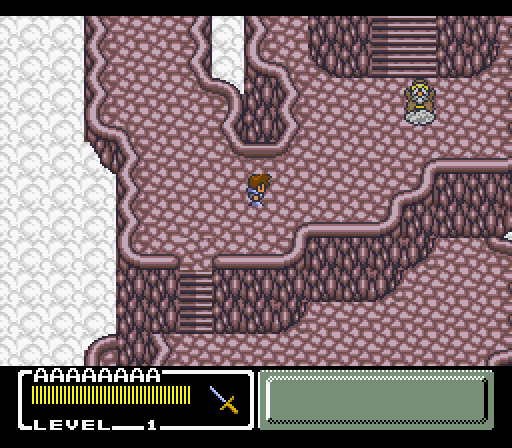 Like previous games in the series, Final Fantasy Mystic Quest is presented in third person perspective, with players directly navigating the main character around the world to interact with objects and people. The game features a unique way of traveling the world map. Unlike past Final Fantasy games, players cannot freely roam the world map. Instead, they travel along set paths from one "icon" (pictorial image on the world map) to the next. Some routes are blocked off (restriction is indicated by a gray arrow), but become accessible when the player succeeds in a specific task, such as completing a dungeon. Once its path is open, the player can enter an icon; the game's plot and action takes place within these icons, which include towns, dungeons, and battlefields. Battles are represented in dungeons as visible enemy sprites, and the player is given the option of approaching the enemy and engaging a battle in order to get through the area which the enemy is blocking or just to gain experience. Once engaged in battle, the player is thrust into the battle screen, which presents a window-based menu with three commands to choose from: battle, run, or control.